With national policy discussions taking place about stimulating the economy through infrastructure investment, transmission is getting some welcome attention. After the COVID-19 health emergency is under control, getting the economy moving will be a high priority. Transmission not only puts people to work directly, but major lines also enable job-creating generation projects to move forward that are currently stuck in interconnection queues. Why is transmission suddenly getting more attention as talks around a potential infrastructure stimulus progress? How could transmission policy support both the potential economic recovery and infrastructure modernization? And, if so, what specific policies would help enable further transmission development?

On Friday, April 24 from 12-1pm ET, Americans for a Clean Energy Grid hosted a discussion of these questions with top experts: 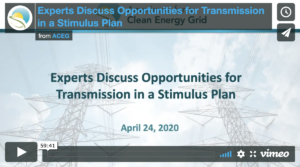 Listen to audio from the webinar on Soundcloud:

Christina Hayes is Vice President of Federal Regulatory Affairs at Berkshire Hathaway Energy. Hayes served as a legal and policy advisor in various capacities at the Federal Energy Regulatory Commission including in the office of Chairman Jon Wellinghoff. Berkshire Hathaway is diverse energy company with assets of $101.1 billion, including one of the largest portfolios of renewable energy and transmission in the country.

Jigar Shah is the Co-Founder of Generate Capital, an investment and operating platform that builds, owns, operates, and finances infrastructure assets. Jigar is known as the Founder of SunEdison, where he pioneered “no money down solar” and unlocked a multi-billion-dollar solar market, creating the largest solar services company worldwide. In 2009, Jigar joined Richard Branson to be the first CEO of the Carbon War Room, a global non-profit commitment to supporting global entrepreneurs scale their climate solutions. Based on that experience, he authored Creating Climate Wealth: Unlocking the Impact Economy.

Michael Skelly is a Senior Advisor at Lazard Ltd, a financial advisory and asset management firms. Skelly founded Clean Line Energy Partners in 2009 and was the protagonist of the popular book, Superpower by Wall Street Journal reporter Russell Gold. Previously, Skelly led the growth of Horizon Wind Energy from family ownership in 1999 through acquisition by Goldman Sachs and, ultimately, EDP Renewables.