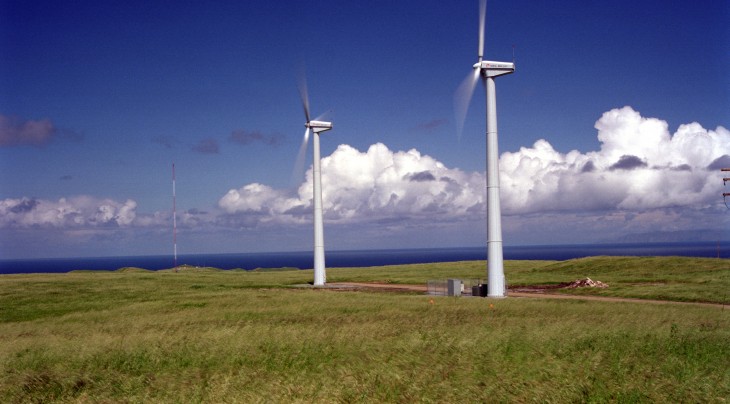 This article was originally published by the Casper Star Tribune on September 8, 2015 .

The wind industry has a stiff breeze at its back.

The cost of producing wind power is now competitive with coal and natural gas. Wind farms accounted for a third of total power installations nationwide since 2007. And, bolstered by President Barack Obama’s carbon-cutting scheme, the towering turbines will likely comprise a greater share of American’s electricity production in the future. A recent Department of Energy report estimated wind would make up 20 percent of U.S. power generation by 2030, up from around 5 percent today.

But in Wyoming, one of the breeziest states in the country, no new wind capacity has been added since 2010. Moreover, no new additions are expected in the near term, as projects already on the planning board work their way through a lengthy permitting process.

The main constraint facing the industry in the state remains transmission, analysts said.

“Wind has hit the point where, if you site it in the right place, it’s the cheapest form of electricity,” said Robert Godby, a professor who studies power markets at the University of Wyoming. “But in Wyoming, it comes down to that transmission. Transmission lines can be as expensive as the project.”

The uncertainty over the industry’s future in Wyoming has been compounded by a series of recent developments, threatening further delays and adding layers of doubt on wind farms already stalled for years. Those impediments range from concerns about avian deaths to federal tax subsidies and the length of contracts offered to small-scale renewable projects.

“I don’t think wind development is for the meek,” said Jonathan Naughton, director of the Wind Energy Research Center at the University of Wyoming.

A federal judge in California recently struck down the U.S. Fish and Wildlife Service’s decision to offer wind developers a 30-year eagle take permit, which would have allowed companies to kill a certain number of federally protected raptors each year without fear of prosecution. The service failed to conduct the appropriate environmental review associated with the 30-year permit, the judge ruled. The take permit is now limited to five years.

The court ruling could have a dampening effect on investment in new wind farms. Bankers might be less likely to lend to projects that could be prosecuted for eagle deaths, the thinking goes. Duke Energy became the first wind developer to be prosecuted for avian deaths in 2013, when it agreed to a $1 million settlement with the U.S. Department of Justice for raptor kills caused by two of its central Wyoming wind farms.

“I don’t think it is a project killer,” Naughton said. “It is just another thing that adds uncertainty when you’re developing a wind farm.”

A Fish and Wildlife spokeswoman declined comment on whether the service would appeal, saying it is reviewing the ruling.

Wind developers shrugged off the decision. The Power Company of Wyoming, which has proposed a 3,000-megawatt wind farm in Carbon County, said the environmental review associated with its take permit will continue. If the Denver-based firm is granted a permit, it will be for five years, a company spokeswoman said.

And sPower said it would continue to work with the Fish and Wildlife Service to minimize eagle deaths around the planned Pioneer Wind Park, its 80 megawatt wind farm proposed near Glenrock. The company declined to say whether it would seek a take permit.

The American Wind Energy Association, the industry’s chief lobbying group, cast the ruling as hypocritical, noting that other industrial developments are able to apply for permits that cover a project’s lifespan under the Endangered Species Act.

“Somehow a species like eagles that are less imperiled you can only get a permit for five years,” said Tom Vinson, AWEA vice president of regulatory affairs. The lobbying group intervened in the case against the Fish and Wildlife Service, arguing the lengthier permit provided developers economic certainty.

Opponents contend the 30-year permit offers a blank check to industry, allowing wind farms to kill eagles for an extended period of time. The American Bird Conservancy, which brought the case against the service, did not respond to a request for comment.

The eagle ruling is just one piece in a wider puzzle of uncertainty facing the industry. A 2.3-cent-per-kilowatt-hour tax credit expired in 2013. A provision in the tax code allows developers who began work in 2014 to qualify for the credit, helping drive a boost in installations in 2015.

Many projects being proposed today are larger than their forebears and do not need the tax credit to be economical, Naughton said. Both Chokechery and Pathfinder’s developers said they were not relying on the tax credit to move forward.

Still, political debate over the tax credit’s plight creates uncertainty for developers who don’t know whether they can rely on the subsidy, Naughton said. Congress passed a one-year extension of the credit in 2012, then declined to extend it in 2013. Debate over whether to reinstate the credit in 2016 is ongoing.

“If you go out to the lobbyists, they will say we need it. If you go to the industry, they say we like it but we don’t need it,” Naughton said. “I think what you’re seeing is the maturing of the technology.”

Meanwhile, in Wyoming, small-scale producers face a new challenge. Rocky Mountain Power, the state’s largest utility, is seeking to limit the length of contracts granted to small-scale renewable developments from 20 years to three. Utilities are required under the Public Utility Regulatory Act to take electricity from projects that generate less than 80 megawatts of renewable power, provided they do not increase electricity rates. The legislation was crafted during the Arab oil embargo and meant to spur renewable power production.

But Rocky Mountain Power, in a filing to the state Public Service Commission, argued PURPA projects are now overwhelming its system. The Salt Lake City-based utility said it is facing 713 megawatts in proposed PURPA projects, in addition to 413 megawatts in existing PURPA development. Combined, the small scale renewable power developments would be enough to supply 96 percent of its retail electric load.

The flood of proposals comes at a time when Rocky Mountain Power predicts “no need for any system resource until at least 2028,” the utility wrote.

Rocky Mountain Power’s application follows a ruling from the Idaho Public Utilities Commission last month, which saw regulators limit the length of PURPA contracts in that state to two years. Three utilities, including Rocky Mountain Power, argued they had been swamped by proposed PURPA projects, thanks in part to an Idaho regulation providing fixed-price contracts to small-scale renewable projects.

sPower, which plans to finalize a proposed PURPA project in the Pioneer Wind Park, said it would not be affected by a change. The proposal would apply only to proposed PURPA projects, the Salt Lake City-based developer said, noting its contract with Rocky Mountain Power has already been signed.

“Fuel sources for renewable energy projects like solar or wind are unlimited and not volatile like fossil fuels. Long-term contracts allow for stable and predictable energy prices as compared to the variability in natural gas pricing,” said Naomi Keller, the spokeswoman.

Still, transmission remains the greatest hurdle to the industry in the Cowboy State. Wyoming exports far more energy than it consumes, meaning its primary markets are beyond its borders.

TransWest Express is illustrative of the challenge. The 730-mile transmission line, which would run from the Power Company of Wyoming’s Chokecherry Sierra Madre Wind Farm near Saratoga to Las Vegas, was first proposed in 2005. The U.S. Bureau of Land Management is expected to issue a record of decision on the transmission line later this year.

Given the lengthy permitting process, Power Company of Wyoming had to take a giant leap of faith to propose Chokecherry and TransWest Express, said Godby, the University of Wyoming professor.

But until those new lines are built, no new wind farms are expected.

“There is no way to get their energy out of the state the way they want to,” Godby said.