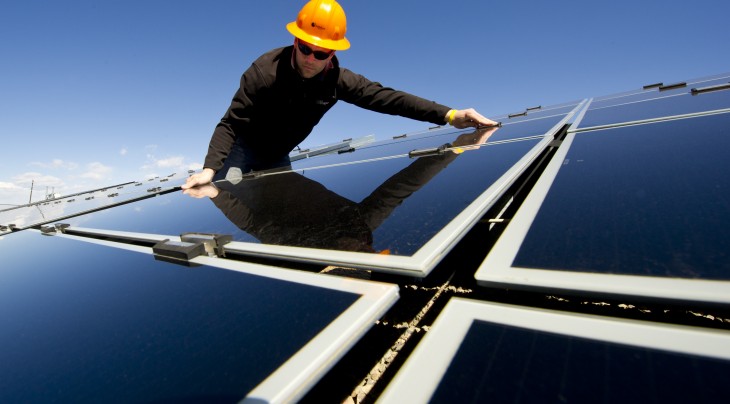 Powering everything in America with renewable energy by 2050 – including transportation – is economically and technically feasible using existing and proven technologies, according to a new study by Mark Jacobson and colleagues at Stanford University.  As scientific evidence grows that avoiding catastrophic climate change impacts might actually require the U.S. and other countries around the world to transition to a 100% renewable energy system (or something very close to it), Jacobson’s study provides a much needed, practical, and high level vision of how the U.S. could achieve it.  Three findings of the study stand out:

Bigger is Better and Cheaper

The welcome and highly visible recent explosion of rooftop solar sometimes obscures powerful economies of scale at work in renewable energy.  Utility scale photovoltaics (PV) produce power at half the cost of rooftop installations.  Wind power is only economical at large scales.  The overwhelming majority of solar and wind power produced in the U.S. today comes from grid-connected, large scale facilities owned by or under contract with utilities. “. . . while the study bases each state’s installed capacity on the state’s annual demand, it allows interstate transmission of power as needed to ensure that supply and demand balance every hour in every state. We also roughly estimate the additional cost of transmission lines needed for this hourly balancing.”

More transmission, Jacobson notes, would make it even easier and cheaper to achieve 100% renewable energy, by allowing the best quality, least cost resources to serve more customers in more states:

“ . . . if we relax our assumption that each state’s capacity match its annual demand, and instead allow states with especially good solar or wind resources to have enough capacity to supply larger regions, then the average levelized cost of electricity will be lower than we estimate because of the higher average capacity factors in states with the best WWS resources.”

Storage and demand response take care of the remaining variability – but not batteries – which are exclusively reserved for their higher value use in transportation:

“Solutions to the grid integration problem are obtained by prioritizing storage for excess heat (in soil and water) and electricity (in ice, water, phase-change material tied to CSP, pumped hydro, and hydrogen); using hydroelectric only as a last resort; and using demand response to shave periods of excess demand over supply. No batteries (except in electric vehicles), biomass, nuclear power, or natural gas are needed.”

Small is Still Beautiful – and Essential

Despite outsized roles for utility scale renewables and transmission, energy efficiency, distributed generation, and smart technologies to enable demand response remain as large and essential elements of Jacobson’s vision.  Efficiency alone reduces projected 2050 electricity demand by 39.3% – even as every end use, including transportation, converts to electricity.  Power supplied by distributed rooftop solar explodes from a fraction of one percent today to more than 7 percent in 2050.  Demand response plays a critical role in balancing variability. Finally, Jacobson deploys a suite of flexible low-cost resources to maintain high power quality:

“Frequency regulation of the grid can be provided by ramping up/down hydroelectric, stored CSP or pumped hydro; ramping down other WWS generators and storing the electricity in heat, cold, or hydrogen instead of curtailing; and using demand response.”

And It’s All Free

The future energy system for the U.S. and the world looks clearer every day – all electric, all renewable, and all running on robust and sophisticated continental grids.  No it’s time to start building it.