Over the past decade, when advocates and policymakers discussed comprehensive approaches to decarbonizing the power sector, transmission expansion was often seen as longer-term concern and not necessarily an issue that needed to be addressed immediately. Building new electric transmission infrastructure was frequently presented as a next step after optimizing every aspect of our current system. Today, transmission expansion is increasingly seen as key climate and infrastructure solution as the U.S approaches generating 20 percent of its power from renewables and Congress debates how best restart our economy in light of the COVID-19 pandemic.

Why is transmission expansion an important climate solution? Numerous studies, including studies by the National Renewable Energy Laboratory (NREL) and the National Oceanic and Atmospheric Administration (NOAA), consistently show that building new high-voltage transmission capacity—to bring low-cost renewables from high-resource, rural areas to population dense load centers—represents one of the most cost-effective and efficient pathways to achieve power sector climate targets. Of course, we should make our current system as efficient as possible, but just as investing in the Interstate Highway System has more than paid for itself several times over, investing in our aging bulk power system would yield similar economic benefits and new climate benefits.

To start, Section 212 of the Clean Future Act, a comprehensive proposal of sector-specific and economy-wide solutions to address the climate crisis introduced in January, specifies the need for legislation to improve the effectiveness of interregional transmission planning at the federal level. Rep. Paul Tonko (D-NY)—one of the primary sponsors—stated during a briefing on the proposal, “I do not believe we can achieve our clean energy targets without building new [transmission] and expanding the capacity of existing lines,” and that, “[w]e need to build more transmission, reduce regulatory barriers that cause new lines to take a decade to build, and increase the capacity and efficiency of existing lines.”

Interregional transmission expansion would not only provide climate benefits—policymakers across the aisle understand its economic potential, as well. This is evident in the Green Real Deal, which aims to combat climate change using the power of free markets and entrepreneurship. Introduced in 2019 by Rep. Matt Gaetz (R-FL), he suggests that transmission expansion “creates incentives for corporations to maximize renewable energy production and allows homeowners to lower or eliminate their energy costs by embracing renewable energy.”

Beyond these larger energy packages, Sen. Martin Heinrich (D-NM) has introduced legislation specifically to improve interregional transmission planning, S.3109 – The Interregional Transmission Planning Improvement Act of 2019. Sen. Heinrich has long been a champion on this issue and recently noted that “there is a disconnect right now between transmission access and the best large-scale clean energy resources. Full utilization of our renewable potential will only be possible when we have the transmission capacity in place to deliver that power to market.” In fact, ACEG and other major stakeholders sent a letter to Senator Heinrich in support of his bill, particularly emphasizing its goal to improve the regulatory framework for planning cooperation between regional grid operators. Sen. Heinrich also has a bill for an Investment Tax Credit (ITC) for high voltage transmission, S.3107 – The Electric Power Infrastructure Improvement Act. 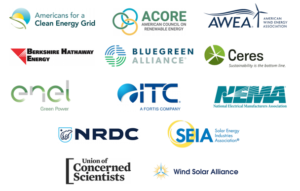 All of these examples illustrate how the importance of interregional transmission expansion, as both a climate solution and electricity cost-saving measure, is gaining popularity given its necessary role in meeting our climate objectives. ACEG is excited to see transmission’s growing popularity across the political landscape and for potential federal bipartisan solutions expanding our nation’s electric transmission infrastructure in the future.

If you are interested in working with our organization, contact us to learn how you can help educate stakeholders and advance the discussion around transmission solutions.