A study published in the journal Nature Climate Change, Future cost-competitive electricity systems and their impact on US CO2 emissions, examines the benefits of building an even larger nationwide transmission network that could save consumers as much as $47 billion annually, a roughly 10 percent reduction in electric bills. As shown below, the network taps into the best renewable resources (green represents wind deployment, red shows solar deployment) to produce around 55 percent of America’s electricity from renewable resources (the outer circle in the lower right shows generation by energy source, the inner circle shows power plant capacity by energy source; wind provides around 38 percent of generation and solar 17 percent). The transmission network would cut carbon dioxide emissions by 80 percent while saving consumers money. 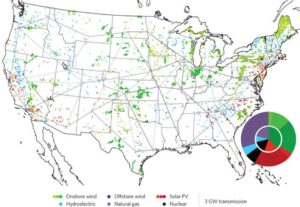 The article found that a major benefit of transmission is capturing the geographic diversity in wind and solar output due to the fact that “the average variability of weather decreases as size increases; if wind or solar power are not available in a small area, they are more likely to be available somewhere in a larger area.” The study notes that “paradoxically, the variability of the weather can provide the answer to its perceived problems.”

Even with a 14 percent increase in electricity consumption from current levels, the study found that demand can still be reliably met in all hours with the removal of all coal generating capacity and a significant reduction in gas generating capacity from what we have today. This is possible because geographically diverse renewable resources provide more output that can be depended on to meet peak electricity demand.