Texas has a remarkable approach for bringing clean energy to the grid that should serve as a model for other jurisdictions around the nation. Their approach to transmission system planning was recently outlined during a Clean Energy Solutions Center webinar, Transmission Planning for a High Renewable Energy Future: Lessons from the Texas Competitive Renewable Energy Zones Process. The event featured speakers from the National Renewable Energy Laboratory (NREL) and the Electric Reliability Council of Texas (ERCOT).
Texas’ Renewable Energy Availability and Demand Issue
Western Texas has tremendous wind energy resources but the region is sparsely populated. Meanwhile, the majority of the population lives in Eastern Texas and has significant energy demand. In the past, there was limited transmission to the Western part of the state because demand was so low. When developers realized the significant opportunity for wind energy in Western Texas, they faced an issue. How would the electricity be transported to population centers?
The Creation of Competitive Renewable Energy Zones (CREZ) 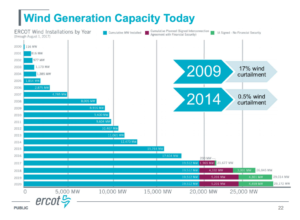 In 2005, the Texas legislature passed Texas Senate Bill 20, which ordered that the Public Utility Commission of Texas (PUC)—in consultation with the Electric Reliability Council of Texas (ERCOT)—to designate competitive renewable energy zones (CREZ) and develop a transmission plan to deliver renewable power from CREZ to customers, while maintaining reliability and economics.
The designation of CREZ focused on large-scale wind resources that can be developed in sufficient quantities to warrant transmission system expansion and upgrades. In order to designate these zones, ERCOT contracted with AWS Truepower to determine the best wind resource zones in Texas. Based on preliminary transmission analysis and wind developer interest, the PUC identified five CREZs in 2007 and ERCOT began to develop a transmission optimization study. Ultimately, the PUC selected a scenario that would accommodate 18.5 GW of wind at a cost of $6.8 billion and construction was initiated in 2010.
The implementation of CREZ has helped to enable the addition of more than 18 gigawatts of wind energy generation capacity to Texas’s power system while overcoming technical issues such as curtailment and transmission congestion.
Policy Lessons Learned in Texas and Texas as a Model for Other Jurisdictions
Stakeholder Input
One of the speakers for the webinar, Jeff Billo, is the Senior Manager of Transmission Planning for ERCOT. He discussed policy lessons learned from Texas, noting that stakeholder collaboration was critical. Without participation from a broad cross section of stakeholders, the elimination of transmission bottleneck issues, and transmission provider competition, Texas wouldn’t have been able to take advantage of their vast wind resources so successfully.
Proactive vs. Reactive Transmission Development
While it might seem obvious in retrospect,  Texas’ decision to plan and build  transmission for the specific purpose of developing inexpensive and abundant renewable energy in the west  and delivering to load (population) centers in the east was in fact a radical departure from standard practice. Historically – and in most planning regions today – the overwhelming majority of transmission is planned, approved, and built in response to a narrow set of pressing economic (congestion) and reliability (age) concerns – not to create an efficient and reliable network capable of supporting critical economic, security, and environmental goals.  Texas’ novel approach provides a helpful model for other regions – showing how transmission investments can directly enable a rapid, low-cost, and reliable transition to a generation portfolio with much higher levels of renewable energy. During the webinar, Nathan Lee, a Postdoctoral Researcher at NREL, outlined the resources NREL has developed to help other stakeholders implement the Renewable Energy Zone (REZ) Transmission Planning Process. In September 2017, NREL and USAID released Renewable Energy Zone (REZ) Transmission Planning Process: A Guidebook for Practitioners, a guidebook intended to help power system planners, key decision makers, and stakeholders understand and use the REZ process to integrate transmission expansion planning and renewable energy generation planning. They are also planning to release a REZ toolkit, an online platform that will include information and tools to aid practitioners in successfully deploying the REZ Process around the world.
Unforeseen Benefits: More Wind, Lower Prices, and Big Solar
Another key lesson of the Texas CREZ experience is that large scale transmission investments typically generate benefits far exceeding initial estimates. Texas has already surpassed the original CREZ target of 18 GW of wind generation capacity, and is on track to build 70% more wind capacity than initially planned. The CREZ also achieved every wind generation milestone ahead of schedule.
Few predicted the magnitude of the economic benefits of the Texas CREZ Project: annual electricity production cost savings of $1.7 billion per year plus another $5 billion in incremental economic development. With a service life of 30 to 50 years, the benefits of the CREZ lines will return their construction cost of $7 billion many times over.
Finally, the CREZ lines are now enabling a utility-scale solar boom in Texas that was never part of the original plan. With more than 1500 MW of utility solar PV already installed, Texas expect to add another 4000 MW over the next 5 years.
Learn more about the issue by watching the full webinar.

If landowners get annual payments for wind turbines, why not transmission lines?